Awarded to a qualifying Junior (under the age of 19 years) who skippers on all the Annual H Class Championship races conducted with the lowest total point score of all other Juniors in the event. They may have a crew member of any age, but no one over the age of 19 may touch the tiller after the preparatory signal of each race.

No award shall be made unless two or more qualifying Juniors compete the the H Class Junior Championship Series and sail in the required number of scored races on the series. In the event of a tie, both Juniors will be awarded a trophy. 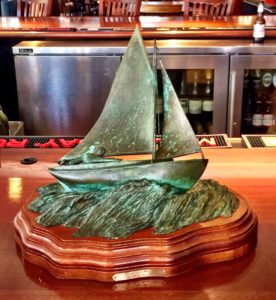 This permanent trophy, presented in 1992, was given in memory of Constance Prosser Mellon Burrell by her daughter, Cassandra Mellon Milbury. The trophy is a ‘team’ trophy to be awarded annually to a yacht club (or recognized ‘fleet’) represented by no less than three members sailing in the annual H Class Championship. At the conclusion of the Championship, each club shall have the scores of its best finishing three members totaled as a team. The winner shall be the club with the best ‘team’ aggregate score. Any resulting tie in the scoring shall be recorded as a tie and the clubs shall share the trophy. In order to be eligible for competition for this trophy, a sailor shall register his/her legitimate club membership affiliation on the entry form submitted for the H Class Championship. In the event no club is represented by as many as three members in the Championship, the trophy shall not be awarded. In the event only one club is represented by as many as three members, the trophy shall be awarded to that club, provided, however, no less than three such members shall have started and been scored for the minimum number of individual races constituting the Championship series.

This permanent trophy, presented in 2006, is to be awarded to the best-scoring skipper, age 65 or over (as of the start of the Championship) in the H Class Championship, providing there are two or more qualifying skippers. The skipper’s crew may be of any age, but no one under the age of 65 may touch the tiller after the preparatory signal for a race. This trophy is given in honor of Katharyn Saltonstall Moore, a past H Class Champion, by her daughter, Josephine Saltonstall Dubois, also a past H Class Champion.

Photo at top by Tyler Fields