The Herreshoff Fleet at the Edgartown Yacht Club boasts 44 boats. The fleet started with four H 12s in the summer of 1976 and has been steadily growing ever since. Our mission is to promote the H12 sailing community, improve racing skills, and have fun. Racing is the centerpiece of our fleet’s activities. 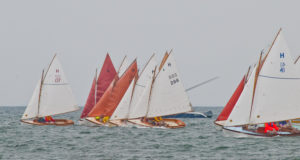 Races are held during the months of June, July, and August. Practice races are held on Thursdays. Saturday races count for the July and August series. These are interesting and challenging because other fleets share the race course with us. Thursdays we weave through the Optis, 420, and Rhodes 19s fleets, sharing the starting and finish lines. Saturdays add Shields and J70 fleets to the mix, and while we generally do not share windward marks with the faster boats, we do share the leeward marks, which sometimes means we are all crowding the finish line together for a downwind photo finish. 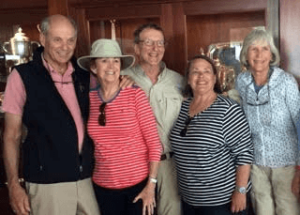 The season begins with the Vineyard Herreshoff Cup. Edgartown Yacht Club’s H 12 fleet competes against the Menemsha Pond Racers. Traditionally these races are held the last Saturday and Sunday of June. The clubs alternate hosting duties each year, with boats towed or trailered to the host harbor just prior to the races. For three years straight, Menemsha has captured the gorgeous silver bowl, while Edgartown inches closer each year to the prize. Points are tallied for the top three boats from each fleet and awarded to the club with the least amount of points. This race is open to members of the Edgartown Yacht Club and members of the Menemsha Pond Racers.

The Independence Cup, a two day competition, follows at the start of July.

The Edgartown Yacht Club Regatta for 2017 will be held July 13, 14, and 15 of 2017. Please find the applications, NOR, and SI online at the Edgartown Yacht Club. We’d love to host Herreshoffs from all of the clubs, so come on over. In addition, the EYC H12 fleet participates in the Nationals each year and will host the H12 Nationals in 2018. The dates are set for that as August 17-19, 2018.

One tradition that the fleet enjoys is our Sundae Sails. Recreational sailors and racers circle in front of the club in the afternoon and collectively sail down harbor. The boats are loaded full with friends and family, creating quite a vision in the harbor. Two hours later, we meet back at our Galley Grill for ice cream sundaes with all the toppings. This popular event is scheduled once in July and again in August, enjoyed by sailors age 4 months to 95 years. 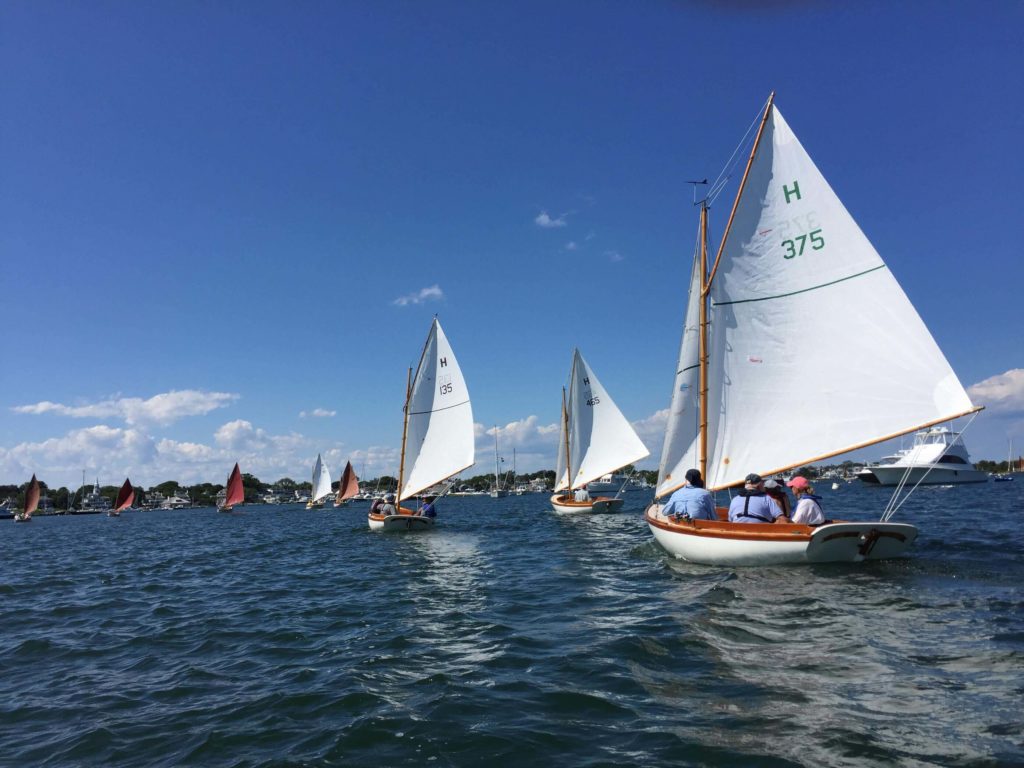 Potluck parties, planned to include racers and leisure sailors alike, are popular with our fleet. In addition, we actively invite beginner sailors from the club’s sailing classes to sail with more experienced sailors, both for leisurely sails and occasional races. Our fleet will host Bill Lynn from the Herreshoff Museum one afternoon in August, and we look forward to learning more about their history from Bill’s presentation.

The last big races of the season are the Commodore Cup Races, a two day event, followed in the evening by our gala Awards Dinner where trophies for the Independence Cup, July series, August series, and Commodore Cup races are awarded. In addition, we have the Welch Trophy awarded to our season champion.

The Welch Trophy in recent years was awarded to the following at the Edgartown Yacht Club.

“Smell the sea, and feel the sky, let your soul and spirit fly.” Van Morrison