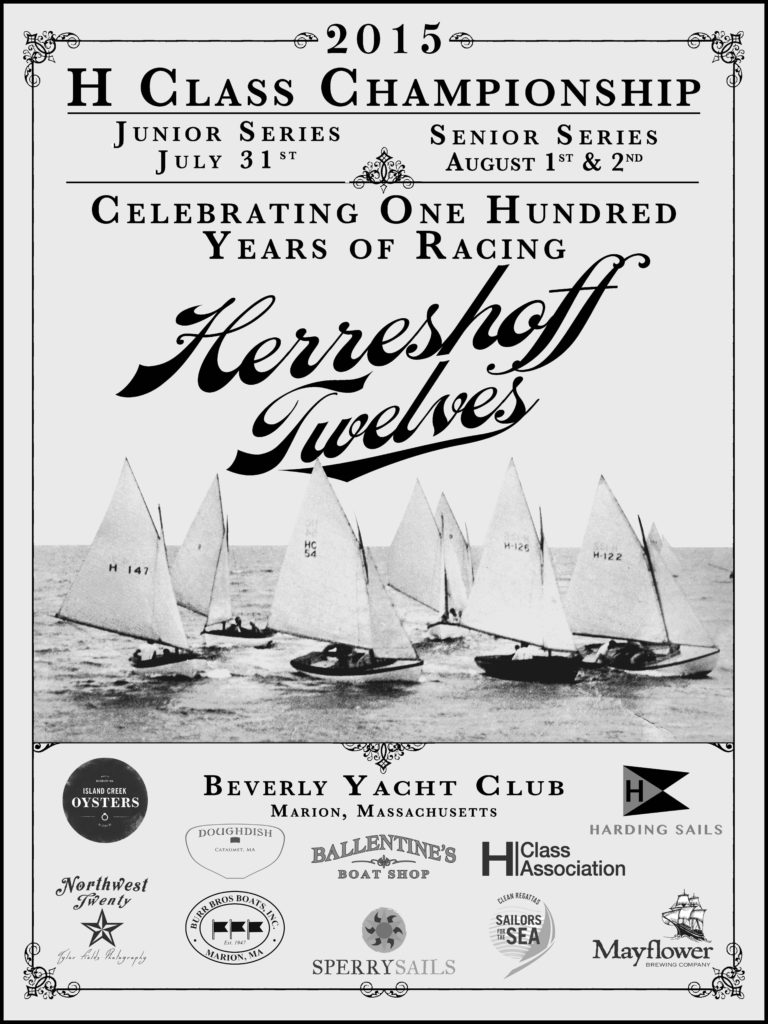 The 1915 BYC yearbook lists, in a handwritten note, several boats in the “12 Foot Racing Class.” They appear officially in the 1916 yearbook, 10 of them: Pygmy, Bonita, Elf, Dormouse, Rhodora, Porpoise, Chub, Whiz and Peggy. Over the years the fleet grew from those few boats to its zenith in 1932, when there were 76 boats listed as racing yachts in the “Herreshoff Twelve-Foot Class”. Beginning in the late 1920s there were so many boats racing that they had two divisions.

Racing at that time happened out at Butler’s Point, which, apparently, was the perfect spot for watching racing – sailing was truly a spectator sport at this venue. There were several docks, and the racers would sail their boats from their moorings in the inner harbor, out around to Butler’s Point, and anchor there, to be taken ashore by the launch driver (also the Bird Island Light keeper) for lunch at the BYC clubhouse. Lunch was mostly always brown bread and baked beans. The courses were long, with starts off Butler Point, the windward turning mark way out at Bow Bells, and then back. Joey DuBois remembers this from the 1930s, and also that there was racing in the harbor, as well, which at the time was far less populated by moorings than it is today. Joey has raced an H 12 all her life and has won the H Class Championship twice. Her first victory in a Twelve-footer was at age 6, when she was the helmsman, her father an able crew! Joey learned about racing from her parents (her mother, Kathryn Saltonstall, was also an H Class Champion), and in Beverly’s H 12 Ladies’ Racing Series, in which she began racing when she was twelve. 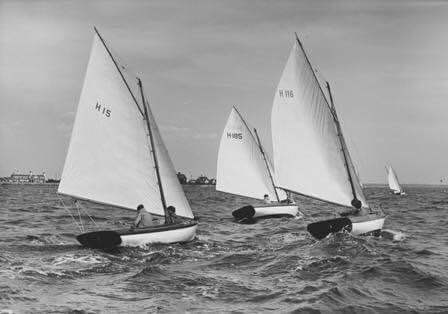 Beverly Twelves Racing in the 1930s - photo from Beverly Archives 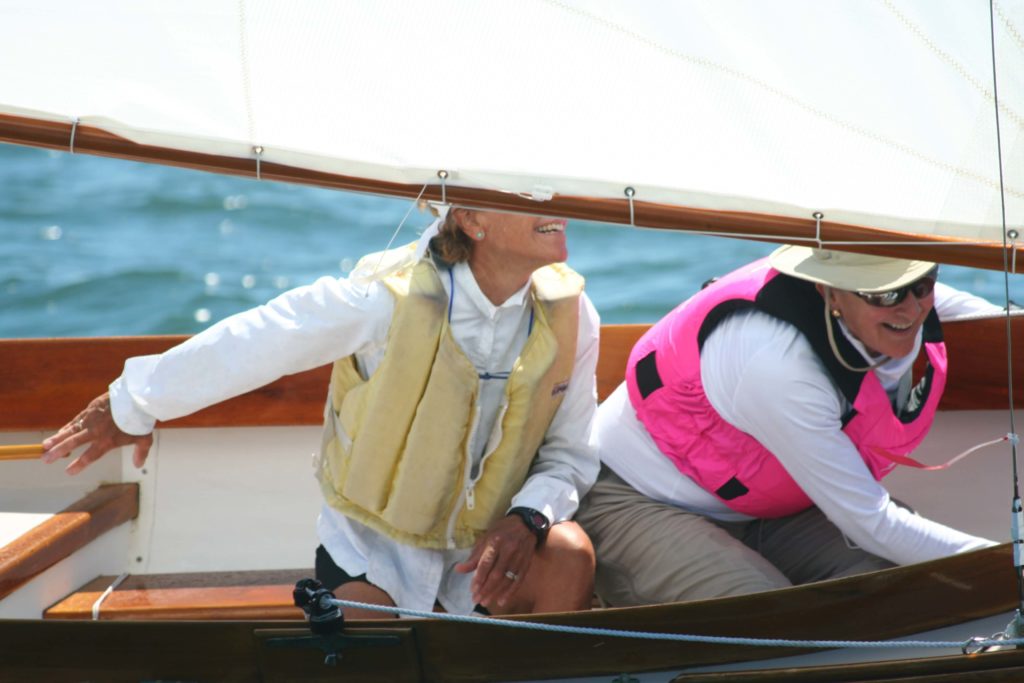 The hurricanes of 1938, 1944 and 1954 damaged many of the H 12s, but the fleet remained strong. Fleet member Peggs Francis remembers pulling the plug out of her H 12, moored out at Converse Point,and sinking it so that it could weather the 1954 storm. She also remembers that, unlike today, the races were never cancelled for too much wind! Peggs has been an avid racer in Beverly’s H 12 fleet, having won the Cummings Cup in 1956 (the precursor to the Championship as we know it), and having been champion of the H 12 Ladies Series on many different occasions.

Today at Beverly, we race these beautiful boats three times per week in three monthly Series Races (June, July and August); every Thursday afternoon at 1400 there is the Ladies’ Racing Series (a long-standing tradition since 1925), and on Sunday afternoons at 1400 the Sunday Afternoon Series is open to boats skippered by either men or women.  New in 2017, was the addition of a Tuesday Night Series, with races starting at 1800. And in September, Fall Racing begins on Sunday mornings at 1000, lasting well into October, storms permitting.

The fleets also race in longer races, including the annual Moonlight Race, as well as the Sou’wester Regatta, the Hurricane Cup, and the Van Rensselaer Race. In fact, the Mary C. B. Cummings Cup has been presented annually since 1928 to the H 12 winner of the Van Rensselaer Race, which was the original Class Championship. Beginning in 1928, and open to all H 12s, the Van Rensselaer was conducted annually by the Beverly Yacht Club, (as a single race competition, over an elongated course) and the trophy was the Mary C. B. Cummings Cup, donated for this purpose. We still award this trophy today. 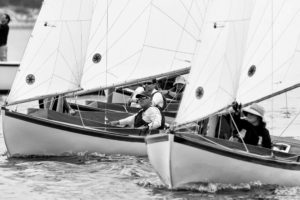 Beverly Twelves at the start - photo by Hew Russell

Our H 12 fleet shares the race-course with the Beverly Bullseye fleet, and some interesting collaborations have resulted over the years. Recently, we inaugurated a day of handicap and pursuit races, the Herreshoff Pursuit, combining Beverly’s very active H 12 and Bullseye fleets for our own version of handicap racing. And additionally, last September, we held the first annual Single-Handed Championship, in which skippers from both fleets single-handed their boats in a day-long regatta. Many sailors from visiting fleets participated.

Going back to its earliest traditions, Buzzards Bay Regatta (BBR), when hosted by 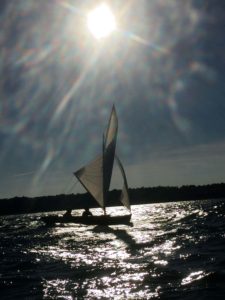 Beverly Yacht Club, now offers a highly competitive regatta for the area’s H12s: The Buzzards Bay Herreshoff Cup. This regatta offers three days of top-notch racing, and lots of great parties. Most recently (in 2016), Buzzards Bay offered up her specialty of challenging, windy conditions – giving these little boats the opportunity to prove their legendary seaworthiness many times over. Mark your calendars for the 2018 Buzzards Bay Herreshoff Cup: August 3-5, 2018. Housing and moorings will be available for visiting boats. 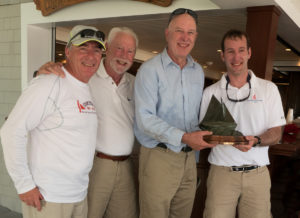 Victorious! Winning the Team Trophy in 2015 at the H Class Championship. Photo by Anne Converse

To encourage new boats and skippers to join in the racing, the Fleet Captains organize training programs and workshops for interested members, including spinnaker training, rigging, rules seminars, and on-the-water racing clinics. And in our Ladies’ Series Racing, the second of two races is sailed by the crew member, with coaching from the skipper, ensuring a steady supply of new skippers on the horizon. This past year we welcomed several new boats into our racing fleet, and expect that the fleet will continue to grow every year.

Today there are more than 60 H-12s in Sippican Harbor, and 40 of those H 12s are part of our Club’s fleet. Of those, nearly 30 participate in our active racing fleet. Since there is so much racing at Beverly, many of our fleet members sail with other Classes, as well, bringing an interesting mix of perspectives to the work we do together. Besides racing, the fleet gathers for social events, and an annual “picnic cruise”, which brings together racers and non-racers alike for a fun day on the water.

Come on out and join us on the water - we’d love to welcome you!