The H Class Association Boats: The History of the H 12 ½ and the H Class

The first H 12½  footer boats were built in 1914 by Herreshoff Mfg. Co, of Bristol, RI, from the original design of Nathanael G. Herreshoff. 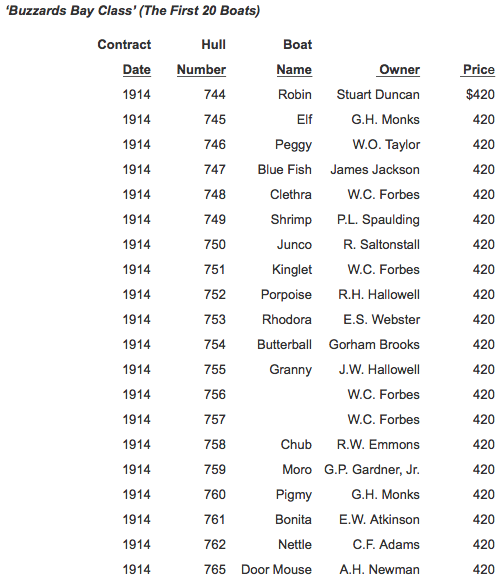 This impressive list of the first 20 boats seems to be as appropriate a way as any to begin a history of the Class. It is taken from the original Herre­shoff Mfg. Co. logbook in which every yacht built by the com­pany was recorded and assigned a hull number, more or less chrono­logically, by contract date. As you can see, the first twenty 12½ footers have consecu­tive hull numbers, except number 765, num­bered following two other boats, but dated back to November 1914. All these boats were delivered in 1915, indicating they were built and completed in roughly eight months’ time. 1914 was otherwise a very busy year for the company as a significant number of other larger historically important yachts were also built at that time. The capac­ity to create and produce new yachts was unprecedented, indeed leg­endary, at the Herreshoff Mfg. Co.

In 1898, Robert W. Emmons II, of Monument Beach, with some friends, had commissioned Nathanael G. Herreshoff to design and build a new class of 15’ waterline length (24’6” OAL) gaff sloops for sailing and racing in Buzzards Bay. The first eleven of these Buzzards Bay 15’s, later known also as the ‘E’ Class, were built, and in 1899 Mr. Herreshoff personally towed them by steam launch from Bristol, R.I. to the head of Buzzards Bay to their owners (a feat in itself).

By 1914, the 15 footers had grown into a sizable class, but were found to be a bit too much to handle by youngsters. Once again, Emmons and a group of friends approached Mr. Herreshoff to create a smaller boat suitable for their children to sail, especially in chal­lenging Buzzards Bay wind and sea conditions and to become familiar with the characteristics of the type of larger sailboats to which they might graduate later on.

The resultant boat was the Herreshoff 12½  footer, and our great class was born. It is unlikely that in 1914 or 1915 the genius of Nathanael G. Herreshoff or the inspiration of Mr. Emmons could have foretold the unique popularity and longevity of the design we have now seen for more than 100 years. She is still considered to be one of the finest, if not the finest, small sailing yacht designs ever created. And as it turned out, the boat was perfect for all ages in the family, not just the kids.

As was his custom, Mr. Herreshoff designed the 12½  by making a half model of the hull and then recorded measured offsets from the model. The offsets were used to build a series of skeletal mold frames in the build­ing shop, and the framing and planking of the hull were then formed on and around the skeleton. The hulls were thus fashioned in an upside-down position, then removed from the mold frames, turned right-side up on their keels and completed. The mold frames were re-used to build successive hulls with the same con­trolled procedure, assuring the desired uniformity from boat to boat.

No lines drawings or construction plans were necessary. Mr. Her­reshoff would specify, in detail, the sizes and types of all the materials to be used, and the workmen assigned to the job would repeat their process in each stage of construction under Mr. Herreshoff’s supervision, right down to all the special hardware, designed by Captain Nat and cast in the shop foundry. At some later time, two additional sets of mold frames were employed. All told, 364 12½s were built by the Herreshoff Mfg. Co.

In 1973, a fiberglass reproduction of the 12 ½ , the “Doughdish,” was introduced into the H Class. The molds for the Doughdish were created by taking the lines from three original wooden 12 ½ hulls. Bill Harding, the creator of the Doughdish, took great pains to ensure his boat was an exact replica of the original, even eschewing the weight reductions afforded by fiberglass construction to ensure that the Doughdish is authentic in every way (other than building material). Harding’s goal was to produce boats which were identical to the Herreshoff originals — so they would have the same sailing performance, enabling them to compete with the original wooden Twelves in the H Class.

For many years, these boats were produced by Edey & Duff of Mattapoisett. However, following Bill Harding’s retirement, Doughdish production has come under the stewardship of Stephen Ballentine and his daughter Amy Ballentine Stevens. Their shop, Ballentine’s Boat Shop, has been known for their meticulous maintenance and restoration work on many of the original Herreshoff 12 ½ boats.