The Buzzards Yacht Club dates back to 1930 and has a long history of Herreshoff 12 racing and sailing. The same culture that the Cataumet and Pocasset founding families created in 1930 still exists today. 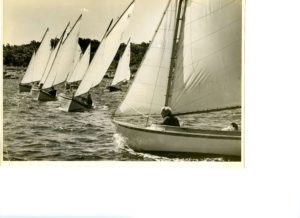 The Buzzards Fleet in the 1950s 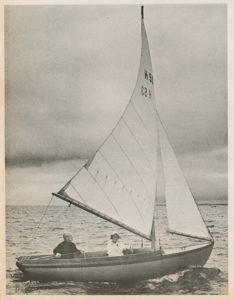 Buzzards’ member families of this informal and affordable yacht club enjoy competitive one design racing and light-hearted fun social activities throughout the summer that welcome all ages and all fleets. The H12 fleet is a robust thirty-five strong which is made up of mostly Doughdishes but includes a few historic wooden 12s including ELF, Man-O-War, Viking and CYNVALARD. 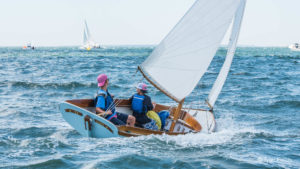 Buzzards Juniors Racing in the 2015 Championship

The Buzzards will typically have 10 to 15 H12s racing in the Saturday Senior Races competing for the July, August and Summer Series trophies. In addition, there are Sunday trophy races and a weekend race series over the July 4th and Labor Day weekends. The races are held between and off the ends of Scraggy Neck and Wings Neck. The strong prevailing SW wind, strong tides and choppy waves that funnel between the two necks make for challenging beats and exhilarating spinnaker runs. When the wind is too strong, the Race Committee aboard the “Buzzard” may send the fleet racing in calmer waters around the partially protected Bassets Island requiring that all channel marks are minded. Several families have been racing for generations in these same waters, first in wooden 12s and more recently many in Doughdishes. Youngsters have the opportunity to learn in the same waters their parents and grandparents sailed. This is why the Herreshoff 12 is such a beloved boat. The Buzzards also has active Bullseye, Stuart Knockabout, and PHRF fleets and a Laser fleet was started in 2016. 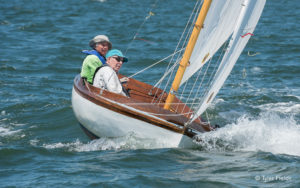 LORELEI, H41, Representing the Buzzards at the 2014 Championship

In July 2014, the Buzzards YC hosted the H Class Championship on the 100th anniversary of the first order of the Herreshoff 12 in 1914. It was quite an anniversary weekend with a fleet of 44 boats racing including 8 wooden 12s. The weekend was highlighted by a spectacular 100th anniversary dinner in the beautiful historic home of Ken & Ardelle Legg, where Robert Emmons signed the first contract for the original 6 Herreshoff 12s (or “Buzzards Bay boys boat, as they were known) in 1914. One could feel the history as racers told stories of their family’s H12 racing and sailing days. 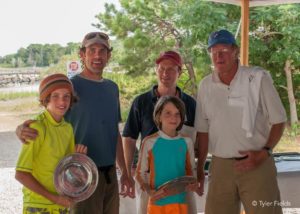 Bringing the Team Trophy Back to Buzzards from the 2014 H Class Championship - A Family Affair! 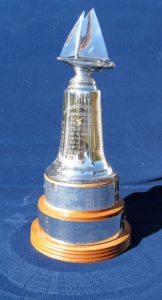 The Buzzards Senior Series H12 trophies are awarded the Sunday before Labor Day at the season ending cocktail party. The oldest and most prestigious is the Reynolds trophy which was donated by Mr. and Mrs. Reynolds of Scraggy Neck and was first awarded in 1936 to the winner of the H12 Summer Series. Several additional trophies are also awarded for the July, August, July 4th and Labor Day Series, many of which are named after and sponsored by longstanding Buzzards sailing families such as Weld, Harding, Pratt and Ware. 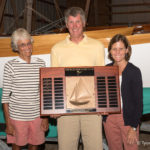 Our H12s also participate in the beloved Chowder Race for any one-design vessels which is an old Buzzards family tradition. This is a fun race around Bassetts Island in either direction not having to mind the channel markers. 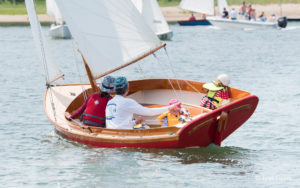 Competing For the Chowder Cup

However, one must end the race sailing backwards over the finish line before heading to the clubhouse for delicious chowder served up in a commemorative “keeper” chowder cup. 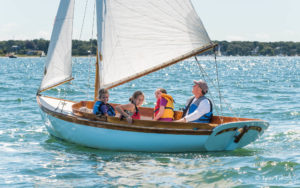 Later in the summer, “Cameron’s Fun Race,” a newer family tradition, is held. This is another fun race around Bassets Island that includes themed sailing instructions which lead sailors from the starting line to a variety of stations throughout the race. Humorous tasks are required at each location before moving on eventually to the finish line.

At the Buzzards YC, we feel very fortunate to be able to enjoy sailing and racing the Herreshoff 12, a timeless classic for all ages, in the beautiful winds and waters of Buzzards Bay. 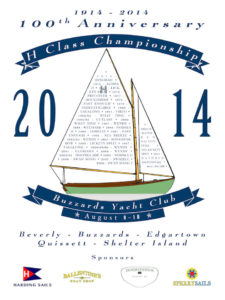 (All photos courtesy of Tyler Fields, and the Buzzards archives)